I just wanted to share how the recent changes to the game have made monster behaviour a lot more interesting.

In a recent game, I just exited a level through the downstairs and ended up in a room cornered with small braziers. Since I was standing in the light of the braziers, I could be seen by anyone who has non-blocked line of sight to me. I suddenly got messages that something missed a surprise attack against me (i.e, an attack by a monster I cannot see or hear).

It was a ranged attack of some sort. I walked toward the source of the attack and got more surprise attacks against me (but they missed). As I went closer an attack hit me (due to the penalty of the surprise attack). When the attack hit, it was announced that the attack was from a “Goblin bow” (but I still didn’t know what attacked me). As I got closer I could hear that a monster was there (indicated by a blinking ‘!’). As I moved even closer a goblin archer came into view. The goblin continued to shoot arrows at me until I managed to corner it at the end of a hallway. When I was adjacent it could not use its bow, it had to use its weak fists instead. 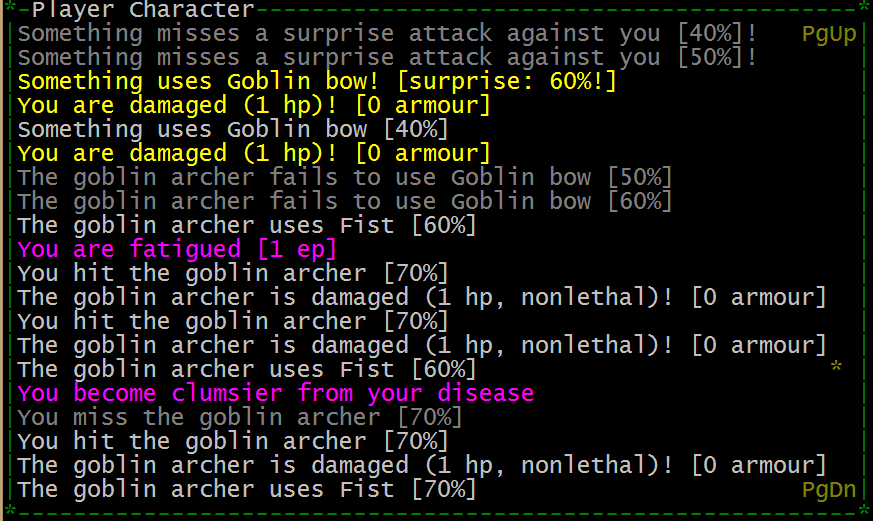 A goblin archer was hiding in the shadows…

After some fist-fighting the goblin got afraid (it got low on health) and fled through a door and I went after it. It then used its “panic” ability to speed up (while becoming louder and worse at combat). This ability made the goblin faster than me so it gained some distance from me.

Having gained some distance, the goblin started firing arrows at me again! Luckily it misses most of them (without the surprise attack bonus it was quite inaccurate with its bow). Since it was louder from its panic ability, I could still hear it (and therefore able to locate it, and not being vulnerable to surprise attacks). After some cowardly shots it runs out of arrows! 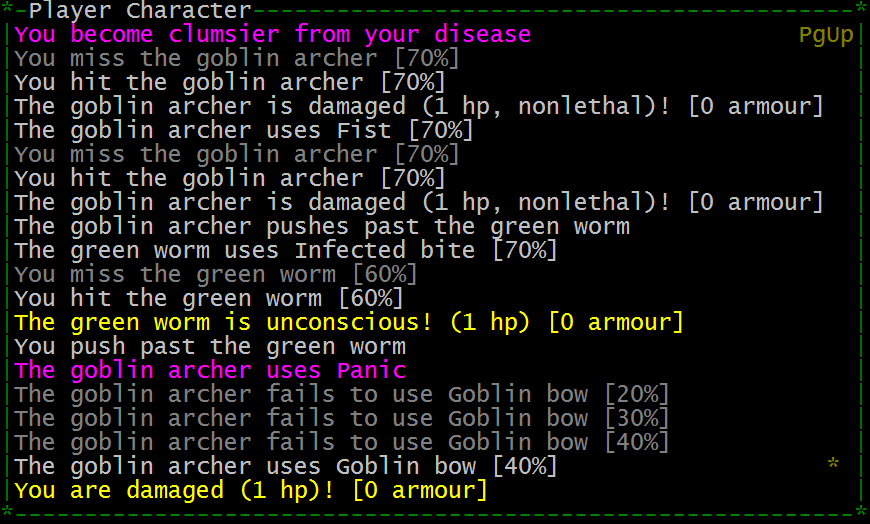 The goblin is now out of mana and arrows, I’ve got him cornered and he can only defend himself with his fists. 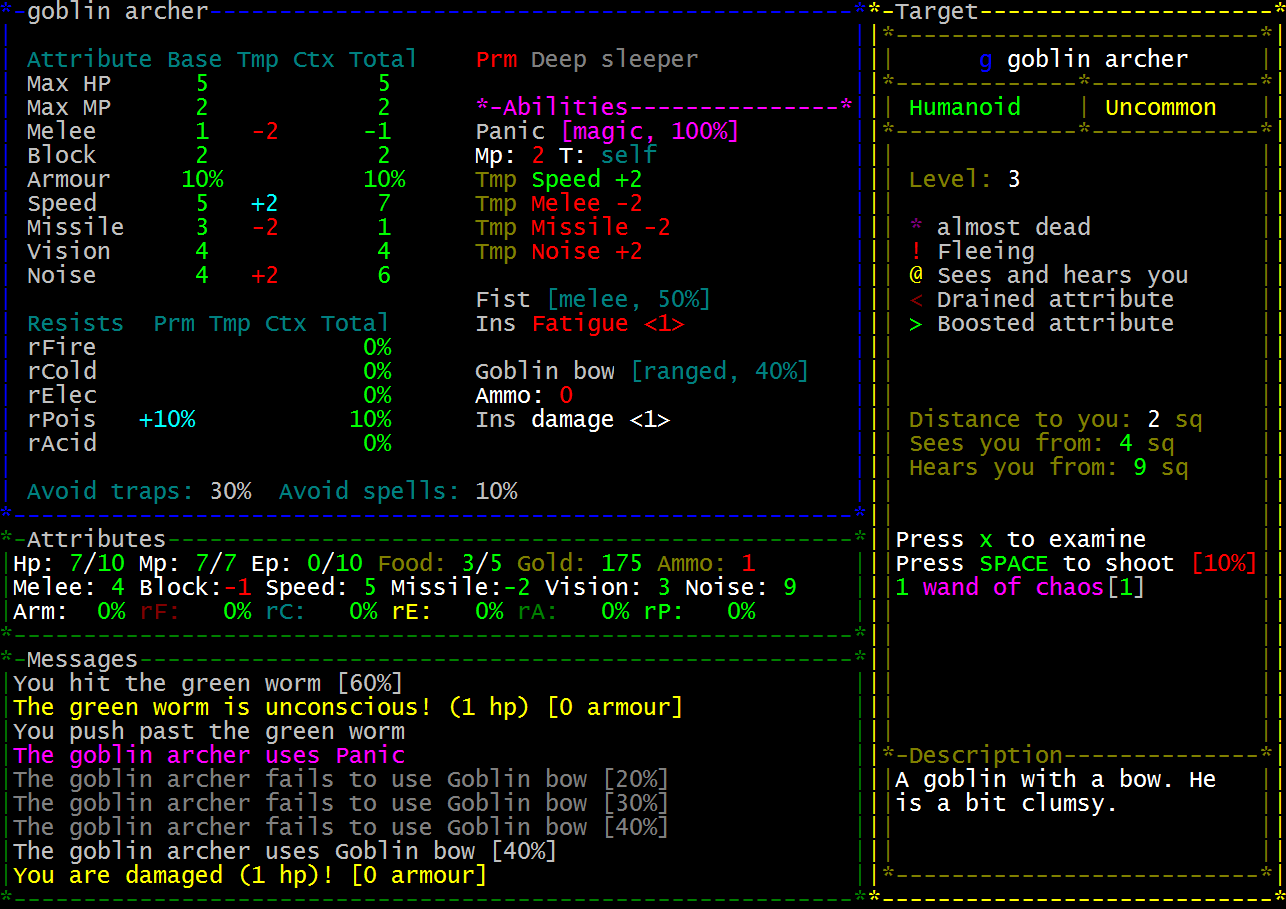 The goblin archer is out of resources.

As you can see, there are a lot more possibilities for emergent behaviour and an interesting combat dynamic. In the beginning the archer had a huge advantage over me, hiding in the shadows and shooting at me while I was in the light. As I cornered it had to fight with its fist and then run away. Using its panic ability, it could run and get a few shots at me before finally being cornered with few defences: the tables have turned.

Most of this is due to the recent changes to perception, noise , light, surprise attacks, monster magic and information about monsters. 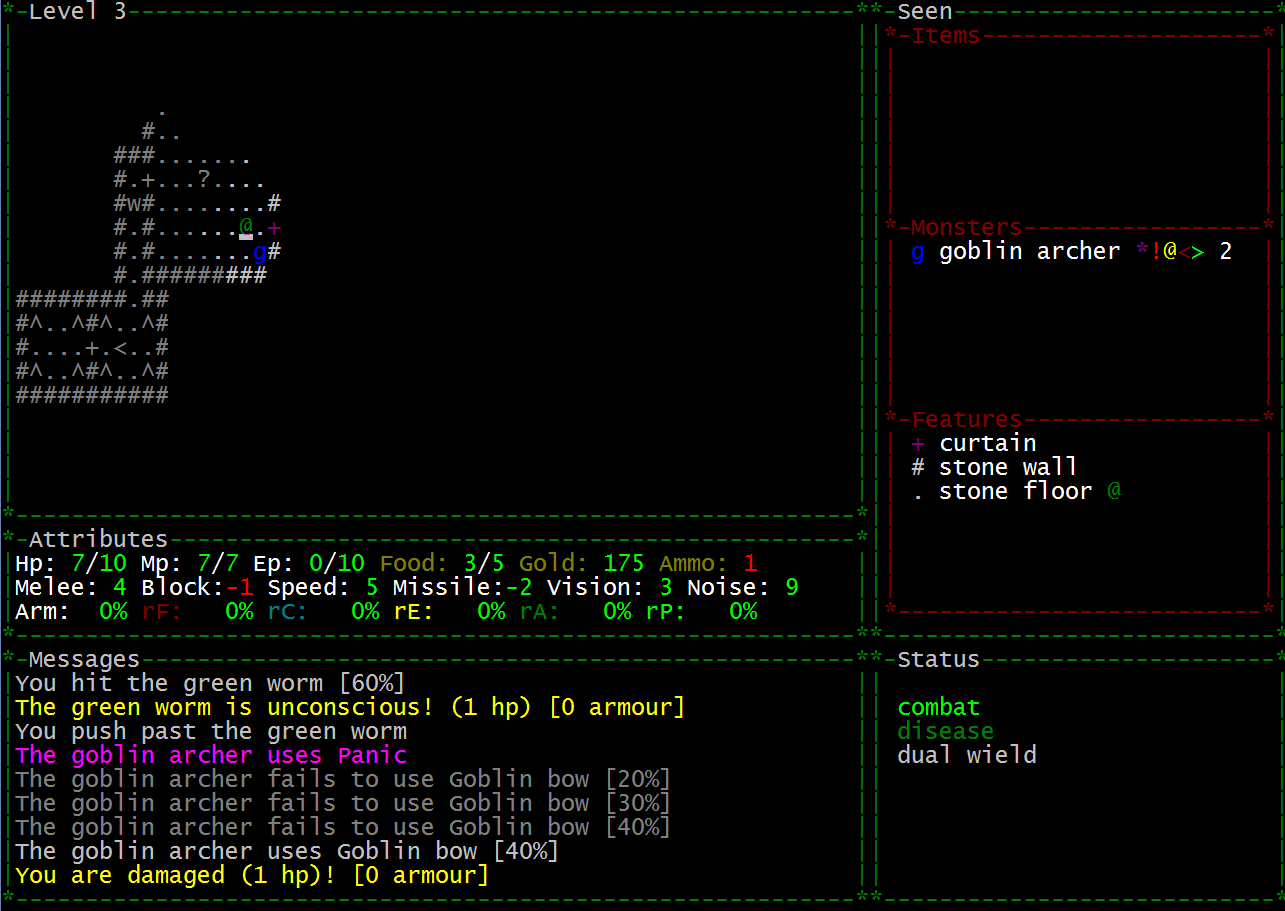 The tables have turned…

If you look closely at the screenshots you will see quite a lot of other changes that I still haven’t talked about. I plan to talk about those soon enough!