Some of the wands in the game increase your attributes at the expense of temporary draining your max-mana. The original intention of such wands was that you should not be able to buff your attributes to extreme values by restoring your mana and keep buffing (the mechanics was inspired by Incursions way of handling buff magic). However, given that there are so few ways to restore mana, this was really not an issue. In addition, the buff mechanics had confusing and unintuitive consequences: 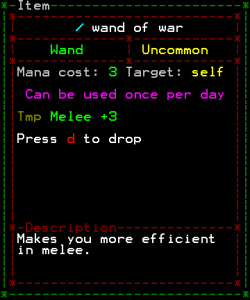 The new mechanics of a wand of war.

The buff wands are still in the game, but now they work just like all other wands, except that they can be used only once daily (just like rods). This means that you cannot buff yourself repeatedly with the same wand, which was my original intention.

Just like rods, wands will no longer stack, so if you happen to find more than one wand you can use its buff more than once, provided that you have enough mana (at the cost of occupying an inventory slot). Moreover, while a buff wand is in effect it is bound to you and you have rest or restore temporary effects before you can drop it.

◀ Preview of the Upcoming Release
It is Coming… ▶