I’m really happy to announce that Release #7 is now finally nearly finished (most likely not more than in 2 weeks). This will be the biggest update to the game I’ve done so far (and the longest delay so far…). I will now enter a testing phase and make sure everything works as it should.

I just wanted to let you know about some user interface changes that makes the game much nicer.

Quite a lot have been done to the user interface. The most noticeable will be that things that “blink” will now blink continuously even if you don’t do anything (for coders: this is done by having a thread continuously updating the map in the background while waiting for the players input). This looks much better (Especially on water, lava, ice and the like. Entering a dark ice room looks quite cool!), but it also makes it easier to detect what things are. In some cases where monsters and tiles have ambiguous colours, it could be hard to realise what things were (e.g., wood could be confused with gold, two equal monsters could look different etc.). It also makes things such as mysterious veins and shimmering water more noticeable, both in the game and in the map view.

Known traps are also blinking now, making them more noticeable, and you are less likely to confuse them with a blood stain for example.

The target display that shows monsters when you target them has always been to small, and sometimes you don’t see all the properties of a monster. This has now finally been fixed by making the target display much larger. I realised that you don’t need to see your status panel while targeting a monster, so now the target display covers the whole right side panel. This leaves much more space for showing the monster stats. 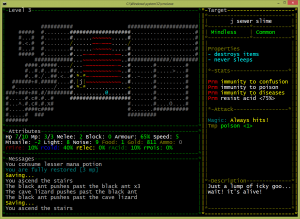 The target display now overlaps with the status window giving it much more space.

When your HP gets low, your character changes colour as a warning. In the current release, your character turns yellow at 50% of max hp and red at 25% of max hp. This would make sense in a game where damage/hp scales very quickly as you progress. But in TGGW damage and HP don’t scale with depth so I wanted the warning colours to reflect what actual danger you are in. So from Release #7 your character will turn yellow at 5 HP and red at 2 HP, this regardless of your max hp. This should be much more helpful as warning system, especially in the cases when your max hp is getting lowered.