I have done major changes to how NPCs work. In v2.3 I changed merchants: Essentially they got an amount of gold, an inventory that updates as they trade and a mood. I also added the possibility to pickpocket them. In v2.5, this will apply to all NPCs instead of just merchants. In addition, every NPC get a (randomly generated) name and a gender to make them a bit more personal. Every NPC is unique. 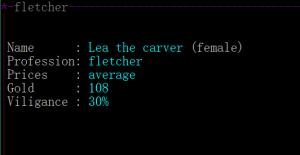 Every NPC now has a profession. Actually, they did before also (warrior, merchant, healer etc) so that is not exactly new. What is new is that their profession determines their inventory, their starting money, what items they are interested in, which services they provide and a few other things. The set of professions are more or less the same as in v2.4 but what the NPCs can do has changed greatly.

There are now a large number of possible services available depending on the NPCs profession. Exactly which services are available and at which price is depends on the NPC. 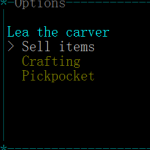 With Lea you can sell items (missiles), upgrade your missile weapons or pick her pockets…

When you interact with an NPC you will be presented with a menu of available services. Services can be for instance: buy items, sell items, sevice spells,  training, pickpocketing and more. Most services costs money. The NPCs gold will update as you trade and pay for services, just like it currently does for merchants.

Some NPCs will offer to cast spells or otherwise give you some benefit for a price. Such services can be used only once per day and NPC. Such a service will give you a set of instant or temporary effects. An example of this is the healing service from a healer. 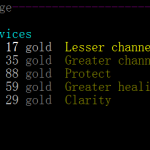 This mage offers a wide range of service spells

Some NPCs will offer training (like warriors, rogues and archers do in v2.4) giving you a permanent effect to your character. There are two changes to training:

You can attempt to pickpocket any NPC. This is still based on your steal/disarm attribute, but it is a bit more advanced now. In fact it is now a minigame.

The minigame involves your steal/disarm attribute as well as the NPCs new “vigilance” attribute. In short: you both make a check, and the four possible outcomes (you can fail or succeed, the NPC can fail or succeed) determines the result of the attempt. You can keep trying until you get busted.

If you get busted you will become aggravating and the NPC will refuse to help you for the rest of the game. 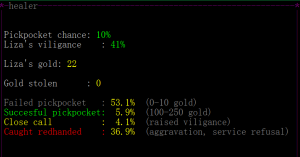 We don’t have much chances for a succesful outcome when our steal/disarm is only 10%. On the other hand, Liza doesn’t seem to have much money anyway…