It has been a while ago since the last post. Development has been a little slow lately, but I am working towards the next release. I thought I’d tell you about a new interesting feature.

I have rewritten merchant mechanics from scratch. Not that it was anything wrong with them before, but I felt they could be more interesting. 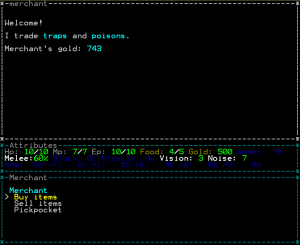 You are now greeted with a menu when encountering a merchant

When you chat with a merchant you are greeted with a presentation of what the merchant trades in and a menu to let you choose what to do.

Merchants are now more diverse than before and can trade in a lot of different items. Prices now also wary between merchants. If a merchant is unusually expensive or cheap, they will give you a message that hints about that.

Merchants also have a limited amount of gold to trade with. Some merchants are very poor and some are very rich. This limits how much they can afford to buy from you. Their gold will change as you trade with them.

Some merchants only sell items, while others only buy items. Most merchants do both (trade) though.

The inventory of a merchant is sorted and generally looks better. (yes, poisons have been renamed to better reflect that they are in fact poisons)

The merchants inventory is now sorted and if the merchant has more than one item they will now stack instead of being displayed several times.

Also new is that things you sell to a merchant will end up in their inventory and you can buy it back later if you want (although more expensive).

Another new and exciting feature is that you can now attempt to pickpocket a merchant! Currently you can only pickpocket (a portion of) their gold. Your chance to succeed is equal to your “avoid traps” attribute (and thus, it may be renamed to “theivery” or something more general). I won’t spoil the exact mechanics regarding this, I want to leave it for you to explore. Needless to say, a failed attempt has negative (but not deadly) consequences.