Right now monsters can attack in exactly one way, either by melee, ranged or magic. For a melee attack to hit, the monster has to be adjacent to the player (unless it has reach) and the chance to hit is determined by the monster’s “melee” attribute and the players “block” attribute.

Finally, a magic attack always hits and can be made if the player is close enough to the monster (again determined by the “range” attribute).

The reason that monsters have exactly one attack of exactly one category is for several reasons: it was the easiest to implement from the start, it is simple to understand and there’s only room for one attack in the right panel.

There are several drawbacks with monsters having only one attack: the attack may be useless (e.g., a monkey stealing from a broke player), the attack may be inappropriate (e.g., an archer standing next to the player), or they may be too powerful (e.g. a water elemental able to hit unlimited number of unresistable water damage that always hits) and it makes the monster predictable and less interesting.

Step Three: Monsters can have any number of attacks

Monsters will now have a set of attacks instead of exactly one. Each attack will still be in one of the categories: melee, ranged or magic and their mechanics will work mostly like they did before (see changes to magic in part 2, and see the next section on changes on ranged combat). The monster will choose an appropriate attack (if several attacks are possible, they will avoid useless attacks unless they are mindless or an animal).

All attacks and spells will simply be called “abilities” and will be listed under the new “abilities” heading on the monster examination screen that you saw in the previous parts. Furthermore, each attack or spell will have a unique name. The exploration screen will show both if the attack is possible and how likely it is to hit based on what kind of attack/spell it is.

Note that a monster can have any number of attacks of any category. For example, a monster may have several melee attacks. All melee attacks have the same chance to hit (based on the monsters “melee” attribute just like before) but it will choose randomly from them every time they attack. For example, the green worm that previously could only bite to cause disease now have two types of attacks: 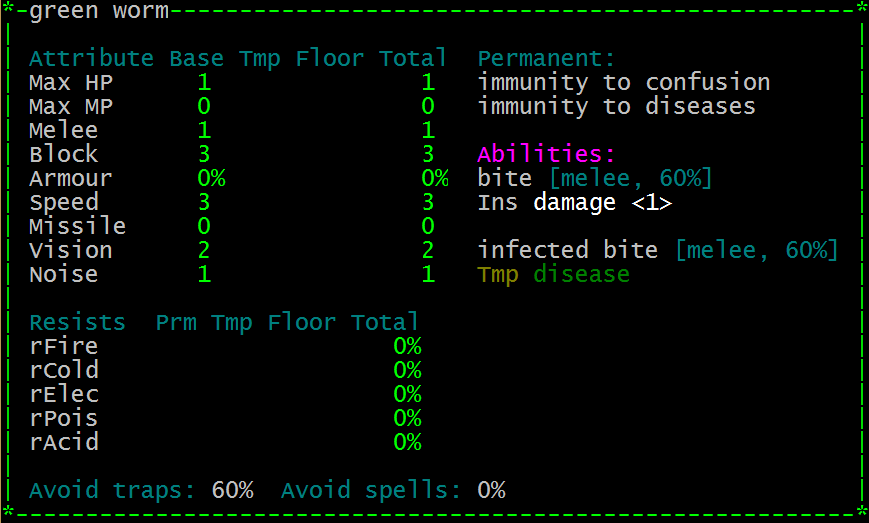 Some changes have been made to ranged attacks as well, mostly to make them more similar to the player and also to reduce their power/annoyance.

Monsters who use ranged attacks will now have a limited stack of ammo. This stack of ammo does not replenish when the player rests. A monster will be able to use its ranged attack if it can see the player, is not adjacent to the player and if it has ammo left. In other words: ranged combat for monsters now works exactly like it does for the player.

As an example, look at the new goblin archer who now has several attack options: it has a melee attack, a ranged attack that it will use on distance and one spell (common for all goblins) that it will use when it is fleeing. 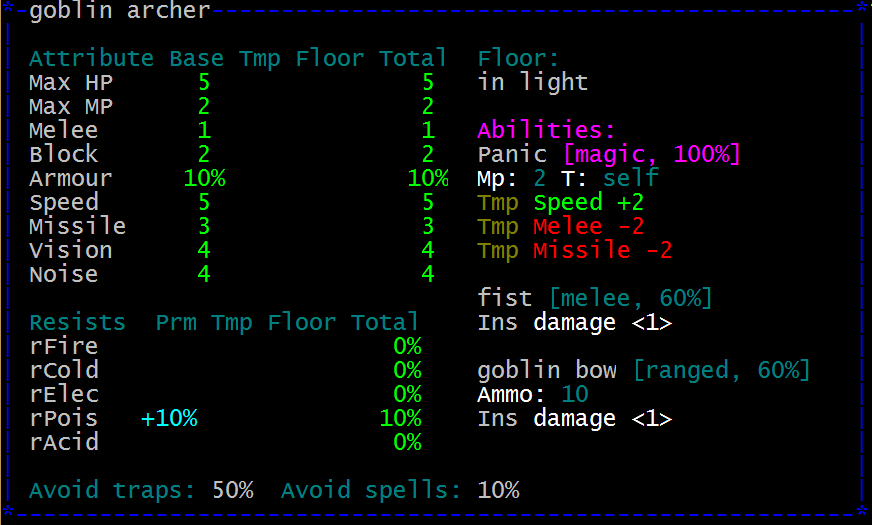 The goblin archer can use it’s fist in melee, use it’s bow in ranged combat or use it’s “panic” spell when it’s fleeing.

This new monster system has a ton of benefits:

There are probably even more benefits, and I really think this makes the game more interesting with these new mechanics.

There are even more changes coming not relating directly to monsters that I plan to blog about soon also.