Yet another change to weapons is the introduction of martial arts weapons.

Martial weapons are connected to a new effect called martial combo. This effect is useful and necessary only when you have a martial weapon equipped (see next section). The martial combo effect earns you automatic extra attacks simiarly to what dual wielding does.

I say “up to” because the attack sequence will be interrupted if any attack misses (you miss your ‘melee’ roll) or if any attack is blocked (the monster succeeds its ‘block’ roll). This means that to utilize the martial combo fully, you need to have a high melee attribute, and it will work best against monsters that cannot block.

If your martial combo drops below one, it is impossible to make a martial attack at all. If that is the case, the game will give a warning that you are ineffective at combat.

So what counts as martial weapons? As with thief weapons, I have converted 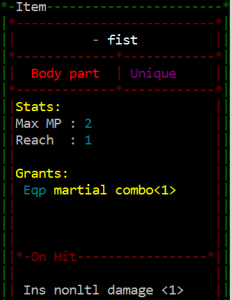 Firsts now raises your martial combo by one

some of the existing weapons to martial weapons:

So in summary, martial weapons have good and bad properties: The good is that they may be able to stack a lot of attacks in one turn if your melee attribute is high, the bad is that they restrict what kind of armour you can wear.

Starting with dual wielding is already quite powerful, and if fists are now also martial, won’t that make them even better? Well, yes and no. With a high martial combo, some damaging gloves and a boosted melee attribute, the fists may definitely be end-game quality right there.

However… starting with a martial weapon restricts what kind of armour you can wear. If you wear anything heavier than leather, your martial combo may be reduced below one, making your fists unsuable. This should hopefully encourage the player to choose one-handed (non-martial) weapons over fists more often.