I just wanted to post some little quality-of-life improvements that makes the game experience a little bit smoother in v2.5:

Ep has been a bit fiddly to manage since Ep regeneration have been depending on how much food you have at the moment. At first I thought that made it more interesting to decide when to eat. However, I notice that I personally find the micromanaging and optimization of Ep-regeneration to be more frustrating than fun, and the choices to make are actually not that interesting. I also feel that the necessity of the “you can still use 3 Ep and be fully recovered” to just be stressful.

In v2.5 Ep regeneration will work just like hp and mp regeneration: you are always fully recovered on rest. Ep-regeneration is no longer depending on food. This is also a buff for the player which I think is ok since Ep has been a very scarce resource.

In addition the warning mentioned above is replaced by a warning that reminds you to identify things in your inventory if you can before resting, since that is now always the right thing to do. The reason the warning was not there before was that with the complex Ep regeneration there were cases where waiting with identification might have been better (e.g. you needed full regeneration in order to identify an enchanted item).

The game will now always prompt you before committing a “cruel” act that would give you aggravation. If you accidently would include a neutral or unconscious monster in a burst-spell, the game will prompt you. This should prevent accidently attacking unconscious or neutral monsters.

The “view discovered items” menu now show you all known places of the item you are looking at. This can help if you remember seeing an item but forgot where, or if you don’t remember which NPC that sold a certain item.

If the item has been used up, stolen by aliens, destroyed or otherwise not  available, it will just say “unknown”. 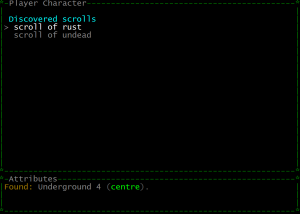 A scroll of rust can be found in the centre of underground 4.

Campfires no longer go out when you bump them if you have nothing to cook. This means that you don’t have to check your inventory before bumping it. A fire can still go out, but only directly after you grill an item. Similarly, grindstones can no longer break items. Instead every use costs 2 Ep.