There are two types of area of effect (AoE) in TGGW: some monster abilities (like the yellow fungus “spores”) and the player can deal make area effects with some rods (like rod of firestorm).

It is currently not very well communicated exactly how an AoE is applied; for rods there is no graphics, and for monster abilities you just see how a symbol travels from the monster to the target. The actual mechanics is that everything that is in the player’s field of vision is affected, but as if the player character had infinite vision. There are also some special cases where monster-to-monster (allies) spells are handled, but all this is hidden to the player. I have now reworked AoEs entirely.

The old area effects are now gone, and instead every AoE is described as a “burst”. Each burst also have a range, so now even AoEs are limited in their range.

A burst is an effect moving from the “caster” and out in every direction just like your field of vision. This is also animated so you can see exactly how the area effect travels. This gives a much stronger “feel” to AoE spells as well.

Wands previously could previously be aimed at yourself or a single target, but the AoE concept is now generalized so that it can be applied to normal wands as well. There are now several new spells that has burst as target mode in addition to rods. 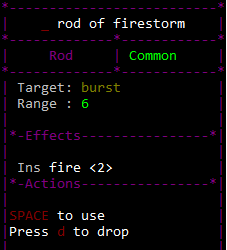 AoE rods now has target type “burst” and a range.