There will soon be a release #3 of The Ground Gives Way. This is quite a major release compared to #2 with a lot of news and an extensive changelog. I am not quite done testing this version, so I don’t know exactly when I will release it, but it still looks like end of August or beginning of September. Apart from a huge number of bug fixes, here’s a brief preview of what’s coming:

As I wrote in the previous post, there are now rods in the game. They are one charge items that recharges upon rest and may have area effects. There are also some new and interesting items that you have to figure out how to interact with. There is also new level content such as caves.

The interface and feedback has been improved on many parts.

As I wrote about in this post, the target system is now much better: you actually control the cursor with the arrow keys instead of just toggling monsters through a list. The service upgrade/preview system has also been reworked and is much smoother in previewing upgrades.

I’ve got many requests for making it possible to autorun in other places than corridors. I have implemented this in TGGW-style, so you still use the space key to autorun. It works just as in corridors and it will make you run in the same direction as you previously walked. Autorun also works even when sleeping monsters are around and will now correctly stop before you can get hurt or wake up any monsters.

A red ‘Z’ indicates that the monster will wake up if you step closer.

A lot of player feedback is now clearer. For instance, the sleep symbol on monsters will change when they are about to wake up, and you will see the distance to any monster in number of squares when you target it (this is useful both for stealth and ranged combat purposes). 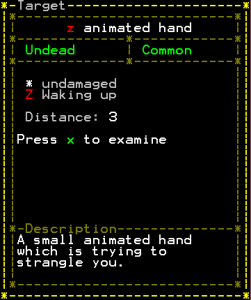 You can now see the distance in squares from a targeted monster.

I still have plans for a couple of more releases that has to wait. Some of the things that I plan to implement in future releases but will not make it to Release #3 are: