v2.3 introduces a new set of interesting behaviours among monsters to make them feel more alive and interesting.

You will find that some of the intelligent monsters will occasionally speak to you (and they will not generally say nice things…). While this is mostly for pure flavour/immersion, they will sometimes reveal information that is useful to you (such as commenting on another monster they have seen).

I have made an effort to make these conversations as interesting as possible by making the things they say highly contextual. There is a great variety of things they can say and it is almost always relevant to the situation (something about your status, the environment or location, their status etc). When a monster speaks a small animation will flash over it.

Some monsters may be permanently or temporarily neutral towards you. That means that they won’t attack you or do anything harmful to you. Bumping into such a monster will just switch places with it. They may also bump into you to switch places with you. Sometimes this can be useful when other monsters are around.

You can still choose to attack a neutral monster, but this counts as aggravating just as if you were attacking an unconscious monster.

Examining a neutral dog. This dog won’t do any hostile action towards you (for now…)

There are some ways of making monsters neutral temporarily (but they will be hostile again after resting). I may also introduce more interesting things in the future regarding neutral monsters (they may provide services or having good or bad auras are ideas that comes to mind).

Neutral monsters are clearly marked by having a different background colour and a visible ‘n’ as status.

Monsters that have hands (this happens to be the same monsters that can open doors) will now pick up items if they walk over them (but they won’t actively search for items). A monster may carry only one item at a time, and you can see if it is carrying an item by examining it. To get the item a monster is carrying, you have to kill it. A carried item will always be dropped if the monster dies.

This mechanic was already in place in the game (in aliens), but is now used by many monsters. It can be seen as a bit more incentive to kill a monster. 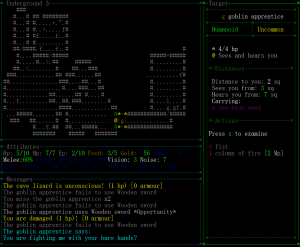