As most roguelikes do, TGGW features procedurally generated dungeons. The dungeon is generated using an algorithm that gets nice and varying results. Below you can see a few generated levels (however, you cannot see monsters or items in these screens):

The dungeon is made out of a wild mixture of rooms, themed rooms, predefined rooms, generated lakes, labyrinths and more. Levels can be flooded, destroyed by earth quakes, filled with mist or other stuff. The main placement of rooms and corridors is inspired by an article by Mike Andersson. However, many different algorithms are used for making the individual rooms.

The different levels are connected through stairs (marked with < or >). Some levels have a kind of 3D-maze structure since you might have to go up and down some times to find the true way down, as can be seen below:

The level can be entered from 4 different places, but the next level can only be reached from one of them.

The dungeon contains many many interactive features. They can have various effects such as modifying your attributes while standing on them (standing on a large rock increases the distance you can shoot projectiles for instance), camp fires where you can grill your food, grindstones to rub off rust from your weapons, fountains with different properties, many kind of containers and much more.

Currently seen features are listed in the side panel of seen things so you can identify them. To interact with a feature you either just walk into it or stand on top of it, while others require you to press the action button to interact. 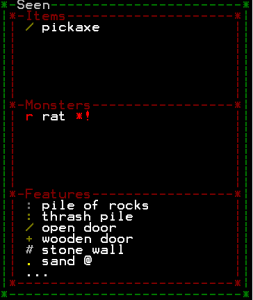