Q: I cannot open the game, it crashes immediately.

Q: The display garbles if I try to maximize/resize the Window

Mouse click on the top left area of the console window when you open TGGW. Then click on Properties and go to the layout tab. Uncheck the box “Wrap text output on resize”. Now you can resize or maximize without problem. Note that the game window size is fixed, and all you can change is the font size (see below). (credit: u/brightglare on reddit)

Q: Is the download safe? Windows says it contains a virus!

This seems to be because TGGW is relatively rarely downloaded and I don’t have a publisher certificate or anything. Windows defender seems to sometimes flag these kinds of files. Other than my personal guarantee that the file is virus free, you may want to check it at www.virustotal.com to make sure it is safe. [credit: reddish kangaroo]

Questions About the Game

Q: Where can I report bugs?

Send me a mail or drop a comment in the blog. Check the known issues below before you submit a bug. I really appreciate any feedback or bug report as I continuously try to improve the game!

Q: How do I change resolution or screen size?

The Ground Gives Way uses Windows own console window. You can change the resolution and font of the game by clicking in the top left corner of the window and select “properties”. In the “font” tab you can change the size, font and screen size.

Q: Why can’t I use diagonal movement (as I am used to in other roguelikes)?

Q: Will the game be ported to other platforms?

Probably not. However, it has been reported to work on some Linux and OS X platforms. See the section Running the game on systems other than Windows section below. 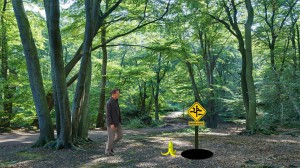 The main point of the “story” of the game is to simply draw attention away from it. TGGW is all about the gameplay. Just like chess or poker doesn’t have a proper story/motivation, I often think that most roguelikes also don’t need one.

Some of my reasons are:

Q: The game is so difficult, help!

There’s a guide to survive the early game here.

Q: I need to pass a stuck door and I’m running out of food, is this a dead end?

No, you will automatically smash open a stuck door when your food is at zero, so they will never completely block your path.

Yes, you can eat force down food items that give “food”. It will make you diseased but you will at least be able to rest.

Q: I’ve come really far in the game without even finding a weapon!

You don’t have to rely on a weapon to get far in the game. In fact, it should be possible to beat the game without any weapon. Fists are really powerful as they give dual-wield (two attacks per turn), and once you meet monsters that are immune to non-lethal damage, you usually have some other means of defeating them.

Running TGGW on Other Systems

While there’s currently only a Windows build of TGGW, it has been reported to work on some Linux and OS X systems with some workarounds.
If you find more workarounds or successful ways of using TGGW on other systems, please let me know so I can put it here.

The simplest way is probably to run Pilcrow182’s launcher. You can download the launcher here. Hopefully this should work on most distributions, let me know if it doesn’t!

Another alternative that seems to work is to type (credit tilkau):

And then (note that the quotes are required):

[credit: irskep]
1) Download Wineskin Winery
2) check the box that says “Use Start.exe” under the EXE path name in the wrapper setup screen. Or use “wine start ~path to tggw.exe~ . [credit: thul]
3) The game window may be the wrong size, so you can adjust it manually and select “retain these settings for later sessions” after clicking ok.
4) if the game still doesn’t work, try to uncheck everything in the screen options. [credit: cerealjynx]
Recommended settings: Menlo 24pt, Buffer zone and windows size 92×38.