Post-mortem of a character

I play The Ground Gives Way quite a lot myself to test it, but also because I actually enjoy it myself. In this post I give a bit of a preview of the game by showing the last character I played. It went quite well as I reached level 11 (out of 15). It is not often that I make it that far. My character met his end by the stairs of the eleventh level by a lesser fire elemental. Elementals start to show up near the deeper levels and are one of the most dangerous foes in the game. As you can see my character had an armour attribute of 80% which makes him pretty much safe from most monsters. Unfortunately armour does not help one bit against fire… 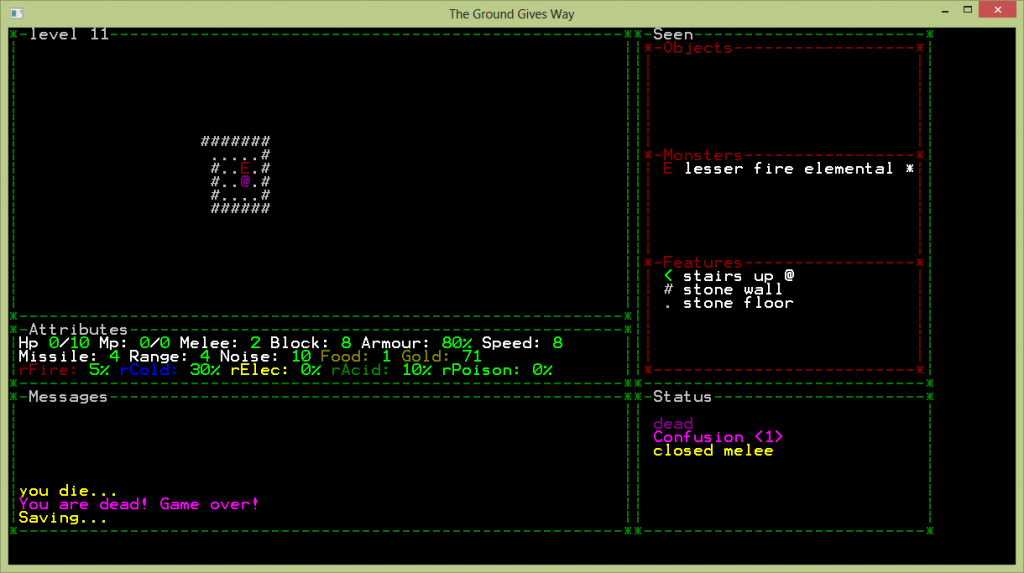 Killed by a lesser fire elemental.

Even as a fully equipped character near the end, his max health was still only the default 10. As seen from the log, fire elementals can make up to 4 in damage per turn unresisted. They are also very fast and there is no way to block the damage from a fire elemental. 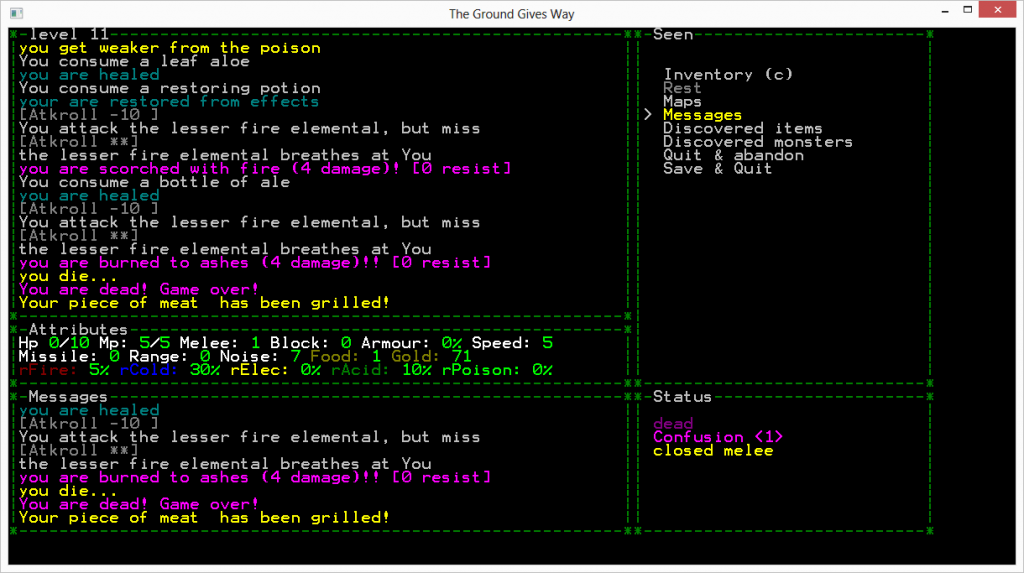 The bitter end (btw, the piece of meat that has been grilled does not refer to the characters body…).

Looking back to the inventory, there was not much to do. My character was very melee oriented (no magic wands) and by those standards very good, especially the 80% armour. The high armour is attributed to equipping items such as an iron cap, a spiked collar, iron gauntlets and a warm jacket of toughness (however, equipping iron items impairs magic ability which can be seen from the fact that MP was maximum 0). 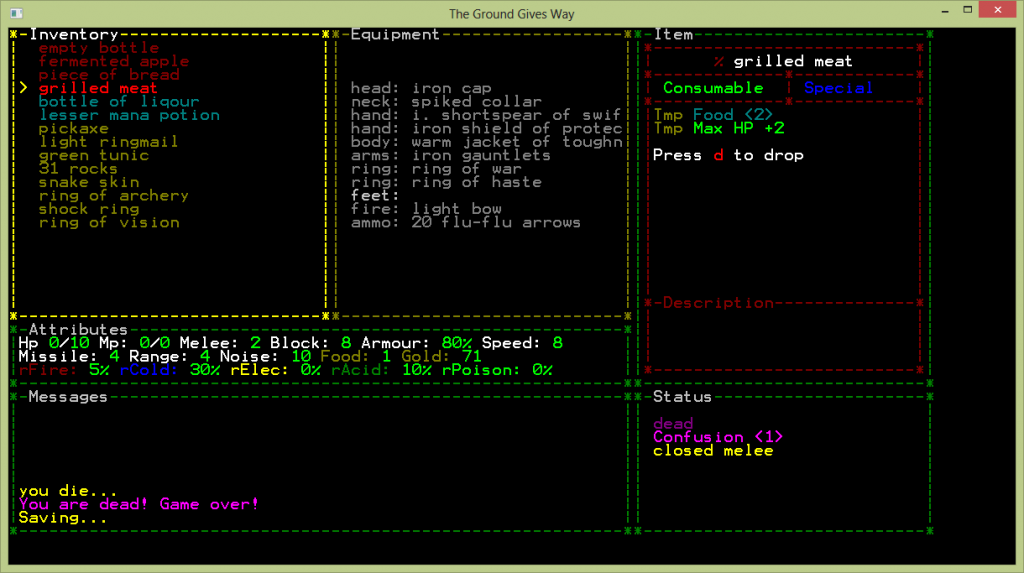 Inventory and equipment of a melee oriented character.

In retrospect, a good idea would probably have been to have turned back when the lesser fire elemental appeared and to scan the earlier and not fully explored levels for a source of fire resistance or teleporting magic. In the end, it still was a decent character. The strength were armour in combination with a high block attribute (that made him nearly invulnerable to monsters that deals normal damage) and speed while the obvious weaknesses were a weak damage output and no possibilities for magic. 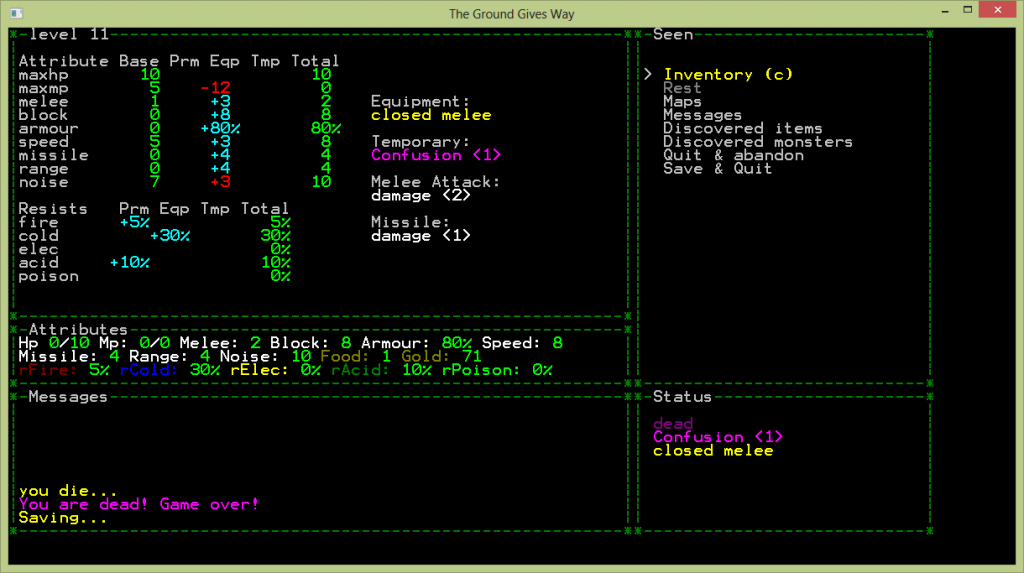 Final statistics of the dead character.

TGGW lets you interact with the game after the death of the character so that you can analyse your game. Here we can see some old memories back from level 2 where it was easy… 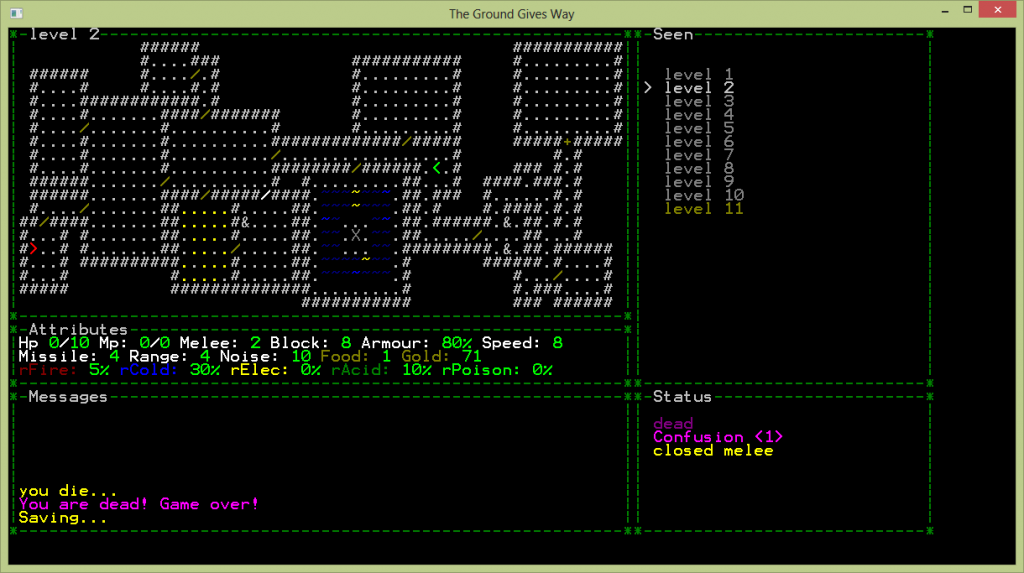 Back on level 2 when it was still easy.

◀ Get notified when The Ground Gives Way is released
Approaching release ▶