I am currently working on finishing up v2.2. The game is currently under testing. This is probably the last blog post content-wise about v2.2. I don’t dare to set a date for v2.2 yet but I aim to release it sometime in late April/early May 2017.

You may want to read part I and part II before reading this. Earlier I talked about how melee and ranged combat had major rework and simplification. Magic has instead become slightly more complicated…

Magic wands and monster spells that target a single actor now always have a maximum range (just like missile combat). This means that you can no longer hurl a fireball 20 squares across the dungeon just because you peek a goblin standing in the flickering light of a small brazier. On the flipside, the monsters can no longer do that to you either…

Having a maximum range on magic attacks also opens up for interesting trade-off spells. For example: there’s now a very short range, but powerful and mp-efficient fire spell. I plan to add more spells of that category as well. 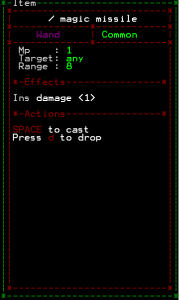 As you know, you can identify unknown wands for the cost of 5 Ep. In most cases it is better to identify it by aiming it at a monster and see what happens. This can be done relatively risk free even if you anticipate that the wand could turn out to be beneficial to the monster.

Now when wands have ranges, this kind of identification won’t work as intended any more: aiming at a monster would give away its range. It would also be tedious to learn that the monster have to be closer in order for you to reach it. The range and the mana cost could be used by an experienced player to determine what type of wand it is (buffwands always have range 0 now).

To force the player to invest in their gear toward a certain build/playstyle (which was the original purpose of Ep), wands can no longer be identified by experimentation: they must be identified by spending Ep before you can use them! In addition 5 Ep is quite a high cost for an identification. This causes Ep to be an even scarcer resource (a good thing in my opinion) and forces the player to invest if they want to play a magic user.

Wands represent spells in TGGW. All wands have the somewhat redundant prefix “wand of…”. However, since wands are really spells, and you know it’s a wand both by the character and the category in the item window. In short, you really don’t need the reminder of that it is a wand. The prefix also limits the name of the function of the wand which is the important thing. 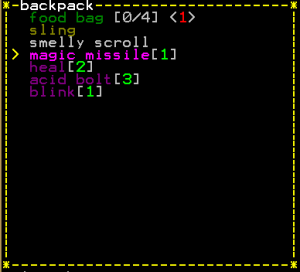 Identified wands will now just have the name of the spell they represent. I have renamed all the wands and given them a new, more descriptive name that represent the spell they cast. Examples:

I do think naming wands in this way increases the feeling that they are really magic spells and just represent the set of spells you have.
There are many new spells with the new system. Spells that are more Mp-efficient but that may have shorter range etc. There are also a new “school” of spells that can conjure up items. 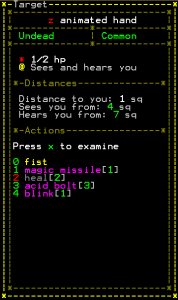 Spells in the target window

Since Mp is a really scarce resource for pretty much any magic user, some spells might seem quite weak. There are now spells in the game that don’t consume Mp! This might sound ridiculously overpowered but they do have some limitations: