You may want to read part I before reading this. Ranged combat are seeing even more changes than melee. Let’s first look at how it looks now (v2.1.3):

Your chance to hit in ranged combat is determined by your Missile attribute and the distance to the target. The exact formula is 50% + 10*(Missile - distance)%. There’s no defence against missile attacks (other than staying away).

The ranged combat is seeing the same kind of simplification that melee combat did. The chance to hit is now expressed as a plain percentage. Another simplification is that this percentage does not change with distance! No longer will you have to close in to a monster so you’re almost adjacent to have a decent chance to hit.

In release #5 I removed the Range attribute. Range was a hard limit on how far your missile attacks could reach. However, the practical limitation on your range was actually your Missile attribute since your chance to hit quickly diminished with distance. When I introduced the Light/Vision attribute instead of being able to see unlimited distances, Range almost stopped having a function at all.

But now when your chance to hit does not decrease with distance, a maximum range suddenly becomes important again. Sure, your Vision is still a practical limit for how far you can fire in most cases, but having infravision or seeing monsters in light can make you target monsters many squares away.

However, range is not an attribute as it used to be. Instead, range is a property of ammunition and launchers. Your total range is the sum of these and are displayed on the player character screen as seen below:

Your current range is displayed

The reason it is not an attribute is that it simply isn’t important enough to be an attribute. The target cursor will turn blue when you can fire a missile at a monster just like before. It will also be displayed in the “distances” portion of the target window. 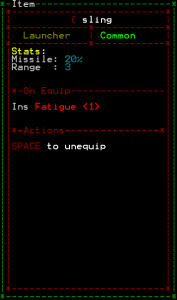 Launchers now display their range in the description and comparison windows.

The Missile attribute will in most cases be lower than your Melee attribute, usually in the 40%-60% range (compare to Melee that will typically be 60%-80%). The logical explanation of this is that it is harder to hit a target at a distance with a missile. The gameplay justification is that ranged combat has less risk than melee combat. However, if you equip and train your character specifically for ranged combat, you can of course reach high values or the Missile attribute, just like before.

Your Block attribute has never helped in ranged combat. However, in v2.2 Block will also block missile attacks (but still not magic attacks) with the same plain percent as melee combat. This is more intuitive (some players have been surprised to learn that Block didn’t help). As with melee, there’s a message and a visual cue indicating whether the attack was a miss or if it was blocked.

It did feel a bit weird earlier that there was no defence against missiles. The reason was that the distance penalty was so hard that there weren’t room for more penalties. In addition it would have made the chance to hit formula too complicated. Now, there’s a defence attribute for missile attacks and the combat formula is even simpler!

The new system can be summarized as follows:

This has a series of advantages: