Two anniversaries in one

Today is exactly five years since the first public release of The Ground Gives Way!I thought I celebrate with a brief post about the history of TGGW.

I don’t remember exactly when I started developing TGGW, it started more like an experiment than anything else. I knew I wanted to make a roguelike and had made a few attempts at them. TGGW was the one I stayed with. The earliest version I was able to find on my computer is from Janary 2009…. that is… a bit more than TEN years ago! So in a way 2019 is special because it is (approximately) ten years since I started on it, and five years ago since I released it.

The reason that it took five years before the first release is mostly becuase I wasn’t originally planing on releasing it. I worked on it in periods, and I had other quite time consuming projects during these times. Since the first release, I have been focusing much more on the game. So far, there have been 13 public releases (counting only the major releases). Here’s a list of the releases, their release dates, and some of the major changes.

The first updates used a numbered release scheme. This was inspired by POWDER’s releases (which were also just a number). I liked the simplicity of it, but later discovered that it didn’t reflect how “big” changes between releases were. When later doing things like Release #6A (for a patched version) I started to regret it.

After wild changes to the game after release #7, I decided to change release scheme and colour theme of the game and call it v2.0 with the promise that the v2.x versions will be a much more experimental where you can expect much larger changes; I wanted to see where I could take TGGW if I didn’t see any feature or mechanic as set in stone.

From v2.0 and onwards the releases have been further apart and much more drastic with overhauls to mechanics, stats and everything.

Below is a small showcase of how the start of a new character have changed through the versions.

As mentioned, the first 6 releases were very incremental and not much changed. The “range” attribute become “light” in release #6. In release #7, dual wield and non-lethal damage was introduced which changed the start screen further. Otherwise the starting screen is mostly the same (click pictures to enlarge): 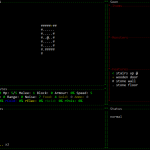 This is how the early starting screen used to look like in release #1-5. 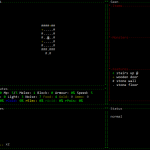 The “range” attribute changed to “light” in release #6. 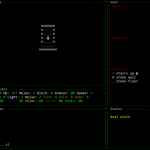 The “dual wield” status is visible from the beginning in release #7.

In v2.0, a lot of things changed, both gamewise and visually. Light were emitted from braziers, the layout of attributes are different, the colour scheme changed. Combat/exploring mode was introduced. 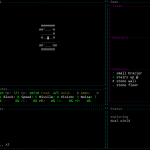 v2.1 briefly changed how stairs worked. In v2.1 (later removed) stairs were bumpable, like in brogue. However, the fact that stairs have to be aligned in TGGW (not in brogue!) led to a lot of very complex problems and restrictions in the dungeon generation, so I reverted this change. 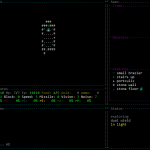 The next major changes came in v2.2 where new dungeon sections and the castle were introduced. Early brazers were replaced by glowing fungi, zero-attributes were hidden by default. The block, missile and melee attributes were completely changed into absoutes (percentages) instead of relative to opponents (like before). The speed attribute was removed. A lot happened. 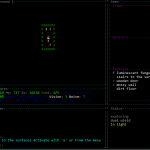 The underground, percentage based attributes and glowing fungi.

While a lot happened in releases v2.3 and v2.4, not much changed visually, until again in v2.5 where we are now: 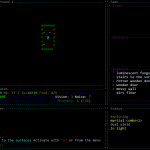 Fungi are now on the ground. Martial arts is active from the start. Attributes are better aligned and more colours in the message display. New thievery attribute.

I would like to give a big thank you to everyone who is playing TGGW. A lot of changes in the game comes from requests, feedback and bug reports from you! The continuous feedback is also why I have kept working on the game. It feels very rewarding and I’ve had a lot of fun these past five  years! I know some have been playing from the very first release. Again, thank you very much and it will be interesting to see where the game will go 🙂