The current mechanics for open and closed combat are quite fuzzy. Both of them give a malus/bonus depending on how many walls are near you, both diagonally and adjacent. These were actually some of the first effects added to the game and came from a time before the game used taxi cab geometry. Open/closed combat also internally has a level (that is not visible) making big axes have “more” open combat than for instance small axes. All of this is hard to understand and for the game to communicate so I have decided to simplify the system.

Open and closed combat now only give bonuses and no penalties (which has been compensated for by lowering the melee attribute of all items with open/closed combat). Furthermore, the hidden levels have been removed and the bonuses are given by the following simple rules:

This makes the open/closed combat mechanic much easier to understand and compare to other weapons since you cannot get lower than the base melee attribute. And maybe most important, the current bonus is now visible directly in the status window (and updated as you move): 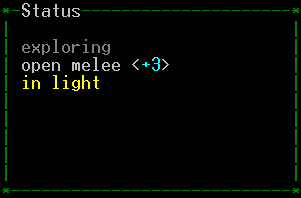 Open melee gives +3 bonus to melee if not adjacent to any wall.