In the pursuit of creating more diverse playstyles, I have introduced yet another mechanic meant for healer/priest-like characters. I envision these characters as truly good chacters that are trying to survive by healing, restoring themselves from ailments and generally trying to minimize the damage they cause (except against the undead!). They have a whole new category of items at their disposal:

A meditation is a special kind of spell that are powered from the goodness and willingness to share within a character rather than from magic points.

Most meditations cannot be used while in combat. They focus on healing, curing and protection, but there are also a few meditations that do damage against the undead.

Since meditation don’t use magic points, you will be able to meditate even while wearing heavy armour and iron items. You can even meditate while confused! However, there are some restrictions on meditations.

To start a meditation you have to obey the following rules:

Meditations can be divided into two categories:

An active meditation have one or more temporary effects that will last until one of the following occur: 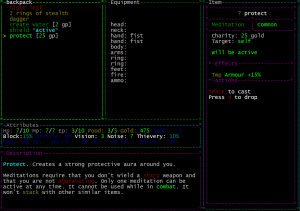 There are no armour restrictions on meditations. Characters can be a melee character that heals and protect itself without using magic wands. Such characters instead have to work around the restrictions of weapons, the charity costs and the non-aggravating conduct.

A character relying a lot on meditations will also have an interesting role-playing side effect: you will use most of your money to charity, and cannot use much money on material things.