In the next release it will be possible to dual-wield weapons. In most roguelikes dual wielding has a lot of restrictions; the attack sequence may be slower than normal and/or the offhand attack may be less accurate. However, for dual wielding to fit into The Ground Gives Way’s design and simple mechanics I have decided to make the rules very simple. This makes dual wielding very powerful but very rare.

That’s it. So if you find two knives you can wield both of them and thereby attack any target twice per turn. Note that the items has to be exactly the same type. For example, you cannot equip a club of fire and an unenchanted club. But you can equip two clubs of fire (however, it would be very very unlikely that you’d find two clubs of fire in one run). Another thing to note is that you don’t get the equipment bonus twice when you wield dual weapons, so if a weapon get you +1 to melee, it doesn’t mean that you will get +2 to melee when you equip two of them.

This means that you need to be quite lucky to be able to dual wield, but when you can, it is quite powerful! 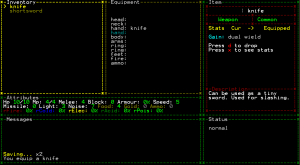 About to equip a second knife. 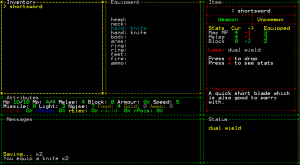